These things were said by senior writer-critic Shambhunath on the occasion of the release of Yatish Kumar’s collection of poems ‘Antas Ki Khurchan’. Under the aegis of Rajkamal Prakashan Group and Radhakrishna Paperbacks, a discussion session was organized for the release and discussion of Yatish Kumar’s first collection of poems at Bangla Academy (Rabindra Sadan Complex).

Before the discussion session on the book, a visual presentation of congratulatory messages received from eminent litterateurs from across the country for the poetry-collection ‘Antas Ki Khurchan’ was also done. Poetry presentation on the text of ‘Kiul: Meri Kavita Ki Dhonkni’ from the collection of poems by Yogesh Tiwari, members of Nilambar and children of Howrah Navjyoti presented a poetry collage based on the poems of this collection.

On this occasion, the co-traveller of poet Yatish Kumar’s creative journey, Smita Goyal, made people aware of the creation process of ‘Antas Ki Khurchan’ and her memories contained in the collection of poems. 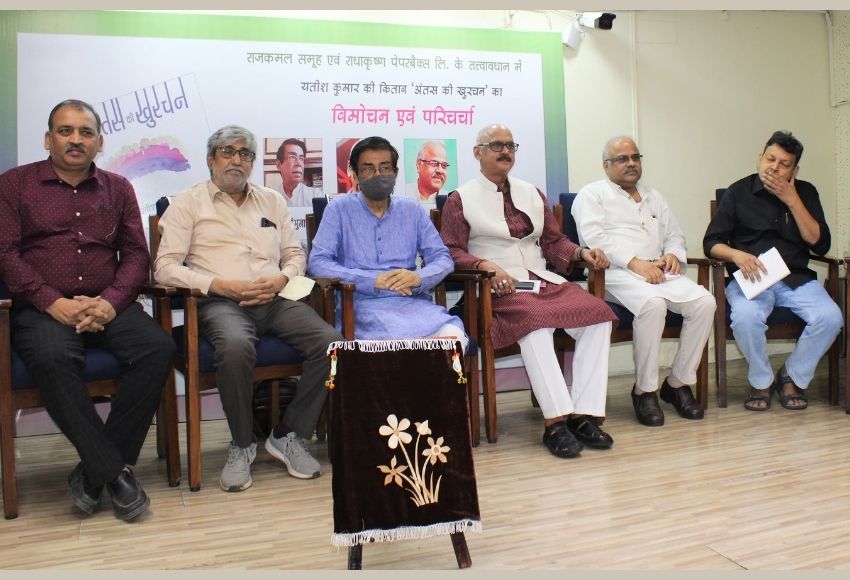 Talking on the political consciousness of the poet, writer-critic Rakesh Bihari said, ‘The poetry of Yatish travels from outside to inside. While reading this collection I constantly felt that almost all of its poems have the potential to be a good poem. In the first collection, if a poet shows you some scenes in each of his poems where he can explore the possibility of having a perfect poem, then it should be considered a great achievement.

He said that usually we have been hearing that every art form is a journey from privacy to sociality. In its presentation this book is contrary to this belief. First there are poems related to sociality, then those related to privacy.

Poet and critic Neelkamal outlined many good poems in ‘Antas Ki Khurchan’. He said that it is the responsibility of the critic to differentiate where the poem is a poem irrigated with blood and which is a poem which is a fraud poem. Based on these things, I tried to make an assumption on many poems of this collection and found that there are some poems in this book which come true. Giving the example of the poems ‘Meri Bachi’ and ‘Sweetest Laughter’, compiled in the second volume of the collection, he evoked the soulful relationship and affection between father and daughter in the poem and said that the poet’s vision is self-realization.

Referring to the poem ‘Convenience and Freedom’, Nilkamal said that he has touched on issues like cybercrime, data privacy and raised a new topic. It is the achievement of poetry that while reading a new poem, you may remember an old poem of a great poet. I felt a similar feeling while reading poems like rain from this collection. In the first collection of the poet, if there are possibilities in eight or ten poems, then the poetry collection becomes really important. In this sense too, it is a book of possibilities.

In his address, senior writer-critic Priyankar Paliwal discussed the meanings of words in Yatish’s poems. He said that such poets who come with a different field and thinking from studying and teaching Hindi, there is newness in their creations.

He has described the introduction of poetry collection through senior poet Vinod Shukla and Ashtabhuja Shukla as important. Giving the example of words like electronic circuit board used in the collection, he said that when the creators come from a purely literary environment, some new words come with them. This vocabulary gives a different aroma to Hindi poetry. Describing the Osara as a symbol of collectivism in the context of poetry, praised the image of the poem.

In his statement, senior poet-critic Ashutosh Singh said, ‘It is difficult to scrape the heart and it is possible only when the poet himself is honest. Before the publication of the poetry collection, we have understood the poet Yatish while reciting poetry in the program of Nilambar. He said that while reading poetry, my attention goes to the poetic language. The introduction of new vocabulary gives a freshness. Yatish’s poetry creates novelty. Here in his poems the soul is not scorched, but it is smoldering and screaming. Yatish has called the shoulder of a friend as the shoulder of Khadi. Tears dry up on the shoulders of Khadi, but now there are silk robes where tears do not dry up. Giving the example of the poem ‘Just want your answer’, he depicted today’s reality by comparing the neglected and those in power. There is no difference between the words of the poet and the deeds.

In his statement, senior poet Mrityunjay Kumar Singh said, ‘While reading Yatish’s poetry, our attention goes to his poetic language. Yatish Kumar’s poetry is full of novelty. In the poems of this collection divided into two sections, the poet has given a beautiful interpretation of the self in one and the world in the other. Through the poems related to the poet’s self, it is said that no one writes poetry on romanticism, but in the poems of Yatish, romanticism is the real form of love.

In the author’s statement, Yatish Kumar talked about the sources and inspirations of writing poetry. Handing over the success of the book to the readers, he said that the way readers are giving love to this collection of poems and senior writers-critics are talking about it, it is unexpected for me.

Pro. Shambhunath said that the release of a book of poetry is the release of a suppressed humanity. Poetry is the expression of suppressed humanity. This is definitely Yatish Kumar’s first book but it is a slow-cooked poem. These poems have come after ripening in a long journey. From the role of the book ‘As the city of my childhood is developing, the sand is becoming covered with the river. She has become very silent. Thin two edges and a doab of talk in the middle, as if the eyes were flowing with noise and still it was smiling ‘. He said that the poet has not been urbanized even after living in the city for years. Calling Yatish a poet of love, he praised his love poems.

Writer Yatish Kumar
Hailing from Munger district of Bihar, Yatish Kumar has registered his special creative presence in the literary world in the last few years. His poems and memoirs have been published in many reputed magazines. ‘Antas Ki Khurchan’ is his first collection of poems.